Welcome to the latest round-up of lateral partner moves in the legal market from Edwards Gibson; where we look back at announced partner-level recruitment activity in London over the past two months and give you a ‘who’s moved where’ update.

This edition concludes our Lateral Partner Moves for 2019 and we have included some facts and figures below comparing the year’s partner-level recruitment activity with that of over the past five years.

2019 saw a total of 444 announced lateral partner moves – 4% up on the 425 moves we saw last year and just 1% off the cumulative five-year average (447). An impressive level of activity bearing in mind the five-year average included the “record years” of 2016 and 2017, where the figures were significantly elevated due to the distorting impact of the insolvent collapse of King & Wood Mallesons’ European Verein. Indeed, the appetite of London law firms for hiring laterals in 2019 was surprisingly robust bearing in mind the backdrop of economic uncertainty from an escalating global trade war, fraught BREXIT negotiations, and, until the December’s general election, the inherent instability of the UK’s hung parliament. 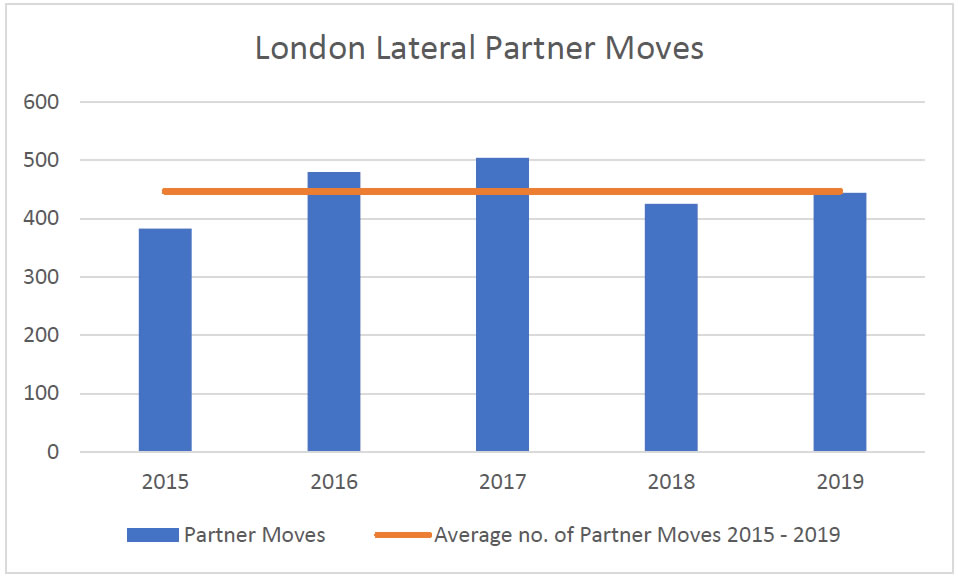 Whilst plenty of firms hired five or more partners in 2018, the most acquisitive firm in London was Dentons which snapped up no fewer than 14 laterals.

Aside from the founding of new shipping boutique Preston Turnbull, which launched itself by tearing out a five (or possibly six) partner team from Clyde & Co, there were two other large team moves announced in 2019 - both by US law firms. Crowell & Moring acquired a very eclectic, five-partner team, comprising disputes, restructuring, infrastructure and debt finance, from Squire Patton Boggs, and Goodwin Proctor made a five-partner raid on Taylor Wessing - stealing a team comprising corporate technology, life sciences and tax.

Despite 2019 turning out to be a very strong year for partner recruitment, this bi-monthly round-up contains 44 lateral partner moves – sharply down on the 61 we saw this time last year and 29% fewer than the cumulative five-year average for the same period – 62.

Top hirers in this edition were Stephenson Harwood, which nabbed four partners - including a threepartner private equity team from Charles Russell, and US firm Brown Rudnick, which hired three insolvency/ restructuring partners.